Sixteen years ago, I went on my first overseas missions trip.  Montego Bay, Jamaica, baby.  I signed up because I had FOMO before FOMO was even a thing.  Every one of my friends was going on the trip, and I was not about to miss out on the fun.  Little did I know that God would use that very trip- and my iffy motives for signing up- to wreck my teenage self for the nations.  For the marginalized.  For him. (Please note how serious we were about laying rebar and spreading the love of Jesus.  I even went to the trouble of purchasing a black and white disposable camera for the dramatic effect of our tireless efforts.  We were clearly HARD AT WORK, you guys.  #allforthemission)

Flash forward a few years to 2004 when I first stepped foot on African soil.  This time, I signed up because, hello, KENYA.  I was also a college student who was sick and tired of the status quo.  I loved Jesus, craved adventure, and longed to step outside of my privileged college experience and put feet to the faith of which I spoke.  Once again, wrecked. 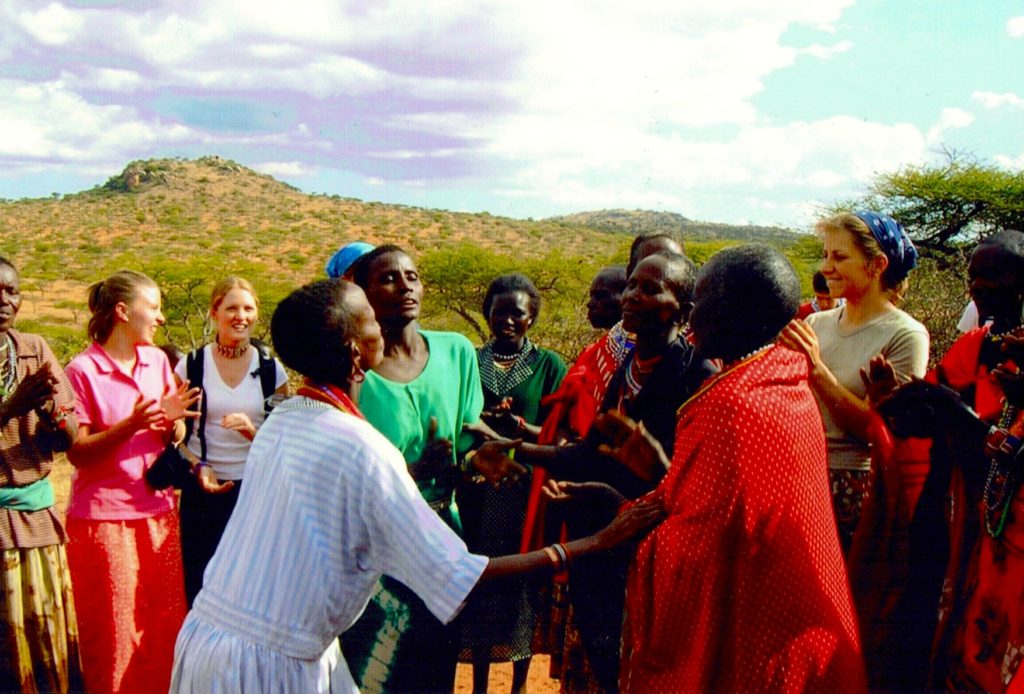 Shortly thereafter, I graduated and promptly (read: one week later) started grad school and bought a house and got hitched.  (Go big or go home.)  Had babies.  Launched into a new career.  In other words, LIFE HAPPENED.  And, aside from a few crucial trips to Congo, I haven’t made it back overseas since.

Well, actually.  Actually, I have a dozen reasons why now shouldn’t be the time.  Because, money.  And the holidays.  And jobs.  And can my kids even survive without me for ten days?  I DO NOT EVEN KNOW.

(A tiny sidenote for all of you high schoolers and college students out there.  Want some unsolicited advice from Aunt Catherine?  Go overseas NOW.  Get involved in God’s mission around the globe NOW.  Take a gap year or a summer or a few years after college and GO.  I know, I KNOW, life seems so crazy right now.  It feels like it’s a rat race out there to score the best internships and summer jobs and whateverelsethereis, but lean in close while I fill you in on a little secret: LIFE JUST GETS CRAZIER, PEOPLE.  Take full advantage of these years before you get married, before you have kids, before you are knee-deep in a career, and consider going now.  You’re welcome.  XOXO, A “Wise” and Increasingly-Wrinkled Thirty-Something-Year-Old)

Y’all.  I’m a master of conjuring up lengthy lists of “what if?”s.  I can think up seemingly legit (and sometimes really lame) excuses with the best of them.  These days, there just seems to be a limitless tally of details to work out and unknowns to think through before saying “yes” to, really, anything.  And a trip overseas?  It’s felt so complicated.  Almost paralyzing.  And still, I felt a quiet voice saying, “Catherine, it’s time.”

I am learning that the white-knuckled grip I have on MY plans and MY life and mymymy doesn’t exactly resemble the type of surrender to which we’re called.  And that following Jesus looks a lot like, oh you know, following Jesus period.  Putting our “yes” on the table PERIOD.  End of story.

So often, I wait for the unknowns to be made known and the details to be perfectly ironed out before I make good on my promise of “yes, I’ll follow.”  Over the years, I’ve watched others come and go.  And sometimes go and stay.  I’ve cheered them on and sent some checks and lifted them in prayer and silently thought, “Well, it’s good thing they’re going.  Because it sure doesn’t make sense for ME to go.  Not right now.  Not with kids.  God, I know you’re faithful, and I know you’re good, but just not right now, mkay?”

And then.  This trip.  Gracious.  Medical missions in West Africa with a group of medical professionals from our church.

Partnering with local medical providers who work with clinics where neither medical care nor the gospel message would otherwise be available.

Providing clinical guidance and support to those working tirelessly in these rural clinics.

Devising an EMS-like system to transport the sickest of patients.

Laying the framework for converting a small clinic into a larger referral hospital.

In a country where infant and maternal mortality is astonishingly high and the desperate need for the gospel even higher.  Over the New Year’s holiday, people.  I mean, I’ve spent some quality time in the African bush before.  But never have I ever celebrated New Year’s in the bush.

And, despite all of the uncrossed t’s and undotted i’s, I’m really, ridiculously pumped.

Want more details?  Interested in supporting this trip?  Send me a message, leave a comment, shoot an email, or send off some smoke signals.  There are some pretty stinkin exciting things happening in West Africa, and I’d love for some of you guys to be in on the excitement!